Guilt is a terrible thing.  But if there is something worse than guilt, its name would be Denial.  Denial is the paralyzing refusal to come to terms with the monster that is destroying you.
A grim scene in Macbeth illustrates the destructive power of repressed and unacknowledged guilt:  Lady Macbeth sleep-walking the halls of her castle with a candle, trying in vain to scour the damning blood-guilt from her hands.
Yet here's a spot . . .
Out, damned spot! out, I say! . . .
Who would have thought the old man
to have had so much blood in him? . . .
What, will these hands ne'er be clean? . . .
Here's the smell of the blood still:
All the perfumes of will not
sweeten this little hand.
Oh, oh, oh!
Her façade is cracking; denial is hard to sustain.


And her husband is even more tortured with guilt than she is.  He moans to himself,
What hands are here?
Will all great 's ocean wash this blood
Clean from my hand? No, this my hand will rather
The multitudinous seas incarnadine,
Making the green one red.
II, ii, 75
Like his wife, his hands are stained with the blood of the king he murdered.  He realizes too late that all the oceans of the world can never purge his guilt.  They themselves would turn scarlet before they could wash his hands or conscience clean.

Pontius Pilate, was as just as culpable as the Macbeths, and living just as much in denial.  But he is not nearly as heroic.  Confronted by the most powerful innocence that ever stood before him, he capitulated to political pressure and signed the execution-decree of Jesus.  And as the crowning sign of his cowardice he poured water into a basin and publicly washed his hands of the injustice, claiming innocence.
But integrity doesn’t work that way.  Ceremonial washing can’t absolve guilt.
King David also knew the gnawing pangs of a guilty conscience, but he offers us a much better portrait of handling guilt in high places.

Like Macbeth and Pilate, David followed his lust into violence, intrigue, bloodshed and denial.  But the prophet Nathan, David’s friend, unmasked him and urged him to end his cover-up, to come clean with his actions and shoulder his responsibility for what he had done.  Tortured by his guilt, David contritely humbled himself before God and pled for mercy.
As a poet and song-writer, David worked through his anguish by composing a song that expressed the depths of his denial, his guilt and shame, his yearning for a clean heart and restored joy.  Here is an excerpt from Psalm 51:2-7. 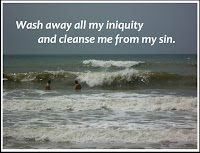 Have mercy on me, O God,
Wash away all my iniquity
and cleanse me from my sin.
For I know my transgressions,
and my sin is always before me.
Surely you desire truth in the inner parts ;
You teach me wisdom in the inmost place.
Cleanse me with hyssop, and I will be clean;
wash me, and I will be whiter than snow.
No denial, no evasion.  Honest confession … and David’s forgiving God washes him clean as snow and transforms tragedy into joy.  Waves of guilt become an ocean of forgiveness for the foulest of sinners - and that spells hope for us all.
Posted by David at 4:49 AM

Downstream from Eden - the Book 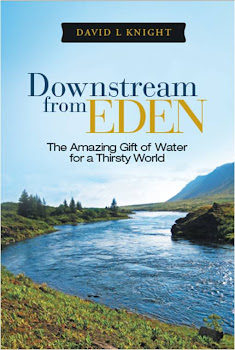 This Blog and Me

David
Waterloo, Ontario
I started this blog in July 2010 to discuss how marvelous water is. The result is a new book, Downstream from Eden, which is about living with water in today’s world with the rich insights of the Bible. ▪ ▪ ▪ ▪ ▪ ▪ ▪ ▪ ▪ ▪ ▪ ▪ Now that the book is published, I’m expanding the focus of this blog beyond the theme of water to include other aspects of life. It seems to me that ‘downstream from Eden’ is an apt metaphor for the whole range of life in our complex world. So welcome to my new blog Downstream from Eden. Please add your comments to my musings and turn the monologue into a conversation. And if you enjoy the conversation, please pass on the link to your friends.

Quote of the Day